Sunday, July 18 – It is 2:30 in the afternoon and at least 28 degrees in Antwerp. The Agoria Solar team has chosen this day to present their solar car to their partners. The ideal weather for the solar car, but a little more commitment from the partners is needed because they might as well be barbecuing in their garden. Although this was not planned, the sponsors got the scoop and we were the first to see the solar car. Normally, Friday 16 July would have been the official press moment before the King, but due to the severe floods in our country, they decided to postpone this event to 2 August out of respect for the victims.

As I walk into the BluePoint room with one of the developers of the Solar App, Roy Melaerts, I see a lovely turnout of people. Sponsors, teachers, students, family but also competitors from the Netherlands and Germany. Everyone is curious about the design of the 20 students!

Everyone their own specialty

Fifteen minutes later we could take our seats and the whole team was introduced by domain: Mechanical Systems, Low and High Voltage, Composites, Strategy, Aerodynamics and PR. It was quite impressive to see how passionately they worked, each team member came across as very professional, mature and communicative.

Gradually, we learned more about their activities in recent months and the production of the car. Like Public Relations that sent out a message on April 1 about the first solar submarine in the making and an enthusiastic VRT reporter who bought this photoshop... Or Aerodynamics that looked to nature for inspiration for the ideal design of the car. You can even find a signature of Frank Deboosere, their favorite weatherman, on the car. It might just help!

About half an hour later, it's time for the reveal! The lights go down and a video starts with some teasers about the look of the car. The whole team walks onto the stage and after a final announcement, the blue curtain falls and the only girl on the team, Birgitt Peeters, drives the solar car onto the stage. This is all greeted by loud applause from the spectators.

The name? Bluepoint Atlas; inspired by this year's Challenge where they will ride through the Atlas Mountains in Morocco, among other places. We also suddenly see which animals Aerodynamics has based its design on: you can compare the nose of the car with that of a shark, the cockpit with a fin and the tail with that of a bird. What an inspiring design! There is no doubt that Belgium is again competing for that first place. According to tests they perform on each edition, this car is again an improved design and even more aerodynamic than the 2019 Bluepoint, the world champion.

The competition has been warned! 😉 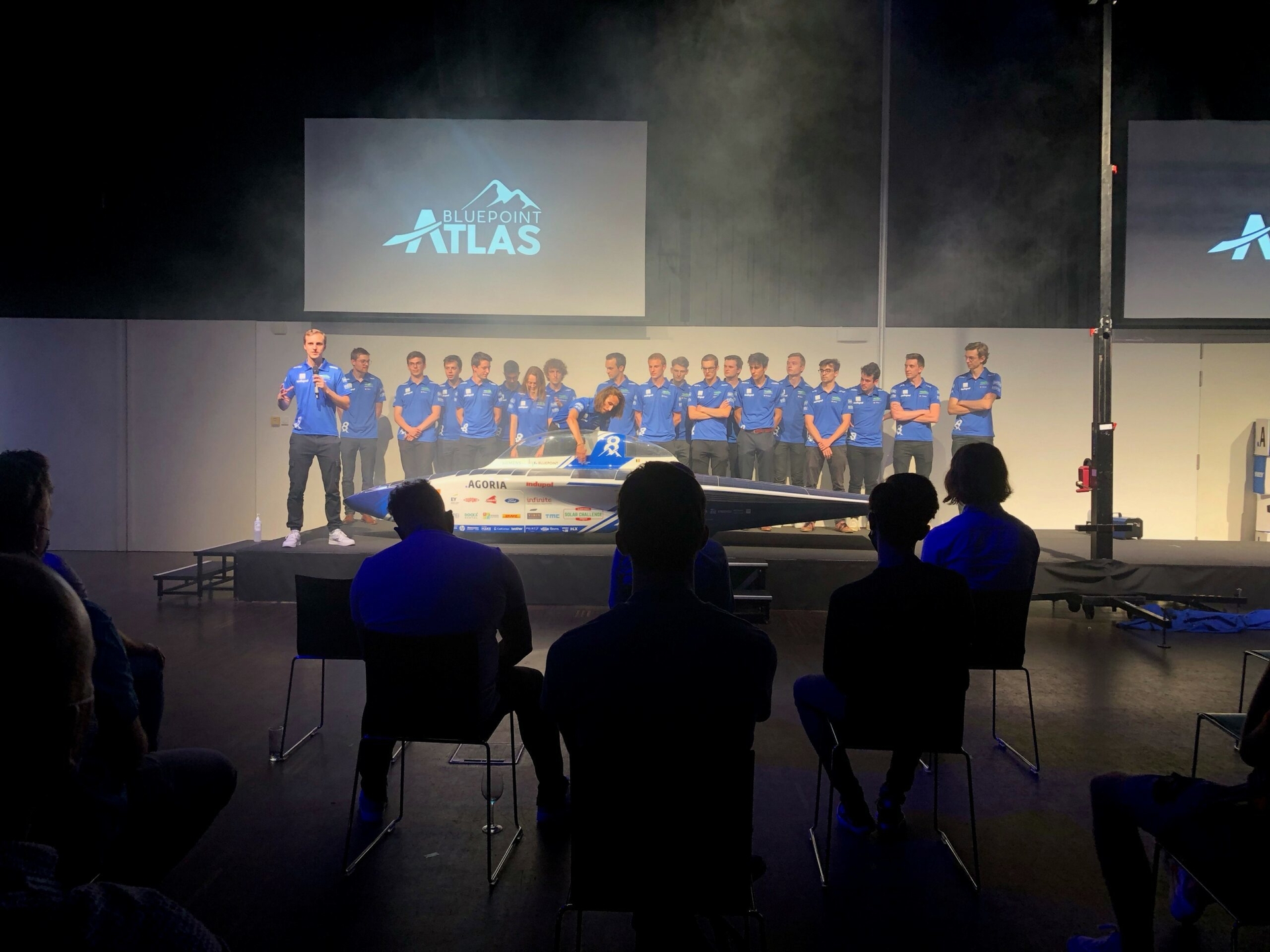 Wednesday, October 20 - This Monday, the race that the Agoria Solar team has been working so hard towards over the past year will start: the Moroccan Solar Challenge!

Six European teams come together to test their most innovative solar car against the other cars. For this they will drive a course of 2500 km through Moroccan cities, the Sahara and along the Atlas mountains. To drive this route fast and flawlessly, Axxes developed a navigation app for the Belgian team.

Watch the collab video here and find out what the app can do!